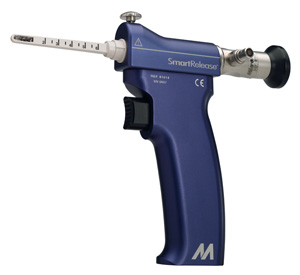 MicroAire’s patented single-portal endoscopic carpal tunnel release system uses a small incision at the base of the wrist as the entry point for a disposable blade assembly. Once inside, an endoscope provides a clear view of the underside of the transverse carpal ligament and surrounding anatomy. With the disposable blade assembly accurately positioned beneath the transverse carpal ligament, the retractable blade is elevated by a trigger, and the ligament is incised with a few strokes.

Low Rate of Complications
“…ECTR provides a high rate of success for patients with CTS, with low rates of complication and symptom recurrence.”2

Faster Return to Work
The improvement in median time of return to work for these patients in the device group was 29 days.”3